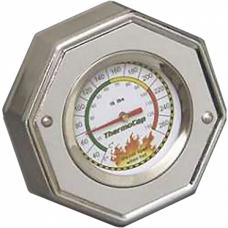 Description Vehicle Fitment Reviews (0) Product Q&A
The radiator cap on your 1949-1954 Chevys can fail due to wear and fatigue, replace it with this Radiator Cap with a built-in Temperature Indicator Gauge. The radiator cap actually increases the boiling point of your coolant by about 45 F (25 C). How does this simple cap do this? The same way a pressure cooker increases the boiling temperature of water. The cap is actually a pressure release valve, and on cars it is usually set to 15 psi. The boiling point of water increases when the water is placed under pressure. When the fluid in the cooling system heats up, it expands, causing the pressure to build up. The cap is the only place where this pressure can escape, so the setting of the spring on the cap determines the maximum pressure in the cooling system. Replace your 1949, 1950, 1951, 1952, 1953, or 1954 Chevy radiator cap before it fails.
The Vehicle Fitment Guide is to be used as a general reference. The data has been provided by our suppliers and manufacturers and may contain errors or incorrect data. Always refer to a professional to verify correct fitment for your vehicle.