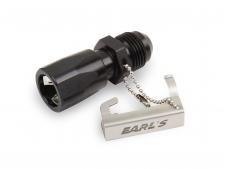 0 reviewsWrite a Review Add to Wish List
Supplier has not provided any fitment data for this product.

CALL US
855.444.6872
Description Specifications Reviews (0) Product Q&A
"Earl's Quick Connects adapt popular GM, Ford and Chrysler 3/8" male fuel connections to -6 AN hose ends. They utilize dual O-ring seals, factory-style steel internal snap retainer, and an external stainless steel redundant clip to deliver the ultimate in safety. These adapters allow a -6 hose end to be mated to factory fuel rails and fuel tank male line connectors. The O-ring material was developed specifically for the factory quick connects and was optimized to resist today's fuels like E85 and new fuel additives that damage common O-rings.
Features:
Holley Performance Emission Code 3: This part is legal for sale and use on Uncontrolled (Non-Emissions Controlled) Vehicles and Racing Use Only Vehicles. The following vehicles are considered Uncontrolled (Non-Emissions Controlled) Vehicles: 1965 and older U.S. manufactured California Certified vehicles/1967 and older U.S. manufactured Federally Certified vehicles/1967 and older Foreign manufactured vehicle. The following vehicles are considered Racing Use Only Vehicles: Racing Use Only Vehicles are vehicles that are used exclusively for competition and that are not registered and that may never be used on the street. WARNING: It is against the law to install this part on an Emissions Controlled Vehicle. The following vehicles are considered Emissions Controlled Vehicles: 1966 and newer U.S. manufactured California Certified vehicles/1968 and newer U.S. manufactured Federally Certified vehicles/1968 and newer Foreign manufactured vehicle

Earl's Performance Products was founded by Earl Fouts in 1955 in Lawndale, California. The mission was to supply high-quality military aircraft surplus plumbing components directly to the racing industry from a small retail outlet. As the military surplus market dried up, Earl recognized the need for continuity of supply for the racing market and pioneered the Earl's range of hoses and fittings that are still used today. In doing so he created the racing aftermarket plumbing industry.

Write a Review
* Your Name:
* Email (This will not be displayed)
* Rating:
Comments:
Submit Review