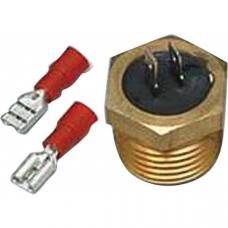 Perfect for your V8 conversion, the coolant temperature sending unit in your 1949-1954 Chevy can became faulty over time due to old age. Because of this, the electric cooling fan temperature sending unit can even start displaying misleading information on your console temperature gauge, or the temperature gauge could stop displaying anything at all. You don't want to be driving on the road without a clue of what the correct read should be on your dash gauges. This temperature sending switch is for use with Camaros with electric cooling fans. Don't wait to have a correct temperature sensor read-out while cruising in your 1962, 1963, 1964, 1965, 1966, 1967, 1968, 1969, 1970, 1971, 1972, 1973, 1974, 1975, 1976, 1977, 1978, 1979 Chevy Nova .
The Vehicle Fitment Guide is to be used as a general reference. The data has been provided by our suppliers and manufacturers and may contain errors or incorrect data. Always refer to a professional to verify correct fitment for your vehicle.