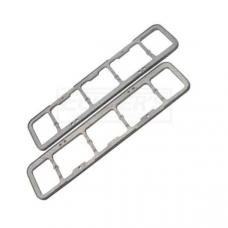 Introduced in 1949, the Oldsmobile Rocket V8 was once the hottest hot rod engine around. With a Fauxsmobile valve cover conversion you can have the look of the classic 1949-1950 Olds powerhouse in your 1949, 1950, 1951, 1952, 1953 or 1954 Chevy. But if you have flange bolt head instead of center bolt, you run into a problem. That's where this adapter comes in. These cast aluminum valve covers are designed for Chevy small blocks from 1955-1986 with center bolt valve covers. Necessary hardware is included so you'll have your street rod sporting that classic Rocket look in no time.