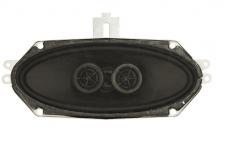 Custom Autosound's dual voice coil (DVC) speakers are designed to give you exceptional sound quality from your classic car or truck's original mono speaker location. These speakers provide up to 70% more cone surface area than conventional dual speakers. This gives you improved bass response and 140 Watt power handling. Both of your radio's stereo channels will connect directly to one of our DVC speakers which are available in 6”x9”, 5”x7” and 4”x10” sizes.